1. If you build it, they will come

The average change in ridership along the new facilities was a 75 percent increase during the first year. Women cyclists surveyed were more likely than men to indicate the facility caused them to ride more. A survey of local residents showed 85 percent were attracted to the facility.

The protected bike lanes included in the study were implemented quickly using low-cost materials. Painted buffers and plastic flex posts were used on more than 50 percent of the routes. While interested but concerned cyclists generally had better perceptions of safety on routes where a concrete planter or curb was used, all types of physical separation increased perceptions of safety. 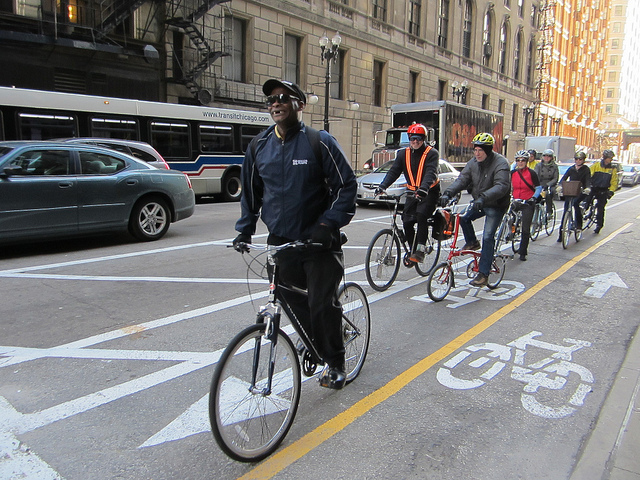 The wide buffer on Dearborn Avenue in Chicago brings to mind Park and Portland. Wouldn't some flex posts be a nice addition to those streets? Photo courtesy of Green Lanes Project.

Almost half of surveyed residents (45 percent) living within one quarter to one tenth of a mile had used the new facility. 75 percent of residents said they would support building more protected bike lanes.

69 percent of commuters who drive would support building more bike lanes, according to the survey of residents. This is despite the perception that parking was more difficult on streets with protected bike lanes – even on a street in Portland where parking actually increased. It seems perceptions about parking do not always align with the facts.

The common jab that cyclists do not follow traffic rules lost some of its sting. Video of intersections found the both cyclists and drivers make illegal turns on red at a similarly low rate, 7-8 percent among cyclists and 6-10 percent among motor vehicles. There was also a decrease of 50 percent in sidewalk riding as these facilities gave cyclists a place of their own on busy streets. 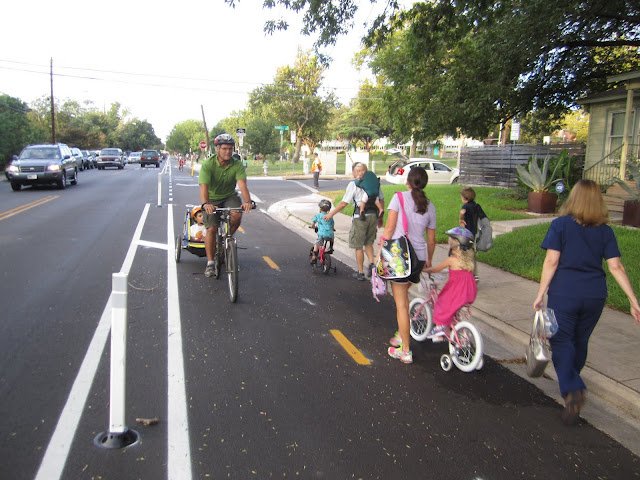 The full study “Lessons from the Green Lanes Project” by Kelly Clifton, Jennifer Dill, Nathan McNeil and Christopher Monsere of Portland State University is a field-based evaluation of perceptions of safety, facility design, perceptions of other road users, perceptions of nearby residents, attractiveness to more cyclists and increases in economic activity. Evaluation took place in Austin, Chicago, Portland, San Francisco and Washington DC. The full study is available for free download.