Bikeways for Nicole and her family! 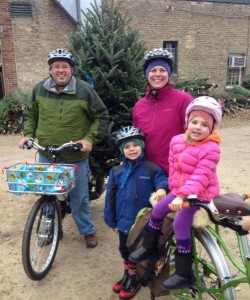 A few summers ago, Nicole and her husband Adam made a commitment to start bicycling as a family for short trips around the city.

The absurdity of buckling two small children into car seats for a quick trip to the grocery store, the library, or school, was not lost on them, and despite having biked very little since college, and even less since parenthood, they researched and invested in new bicycles that would grow with their family.

They committed to riding them for transportation whenever possible.

“We quickly discovered the joys of getting out in the fresh air, and getting to know our beautiful city more intimately due to our slower pace. As our fitness levels, confidence in riding on city streets, and familiarity with the bike systems grew, so did our range. But, despite the beginnings of some really nice infrastructure for cycling that got us out riding in the first place, we discovered some pretty big gaps in the system. And as our oldest has become a competent independent rider, we realized there are many, many places, that are neither safe nor comfortable for us ride.”

For instance, one Sunday afternoon last year, they decided to take Minnehaha Ave home from church. But, not four blocks into the ride, she heard her son, Linus, pipe up from behind on his trailer bike. "Mom, this isn't a very protected bikeway is it?" "Mom, we are really close to the door zone, aren't we?" "Mom, why are these cars going SO FAST?"

She experienced simultaneously trying to:

- keep her head down to avoid potholes and manhole covers,

- keep her head up and ride as far to the left as possible to
be ready for parked cars to suddenly become moving cars,

- ride as far right as possible to avoid the cars zipping by
way too fast,

- and keeping an eye on her daughter in front of her on
her dad's bike, hoping she's paying attention and
holding on tight

She thought, "This? This is what we are renowned for as a city?” She’d love to be able to be safe biking to destinations with her family and be better able to explore the shops and restaurants in Minneapolis and along Lake Street especially:

“There's so much there, but Lake is horrible to navigate by bicycle. I'd also love to be able to explore Hennepin Ave, Lyndale, and Franklin for the same reasons. There are just so many great destinations, and these roads connect to major routes through the city, so you can get pretty much anywhere else from these streets. They are unblocked thoroughfares, so you can get from one end of the city to the other without zigzagging all over the place avoiding highways from them. We do not ride along Lake, Hennepin, or Franklin. Ever. They're the most dangerous roads in the city for cyclists. Unfortunately, they're also the roads with the most destinations! My kids are just starting to be independent cyclists, and I don't feel safe with them riding on busy city streets. At all. I don't even like riding on those streets by myself.”

Nicole and her family live in Keewaydin which she sees as “mostly quiet and safe place to ride, with the exception of a few busy streets that we mostly avoid.” But, getting around to destinations they frequent by bike is challenging:

“We also spend a lot of time in Seward, as that's where our church and food coop are, and we've invested a lot of time in finding the sanest route from our place in East Nokomis to Seward. Hiawatha Ave is a huge barrier for us. We live essentially straight south of our church, but we have to travel quite far either east or west in order to get there, and Minnehaha Ave is also a horrible bike route currently.

We've recently begun taking the trails north around Lake Hiawatha (along, but not on, 28th Ave), cutting down 43rd St and taking 21st Ave north to the Greenway. 21st is a nice street to ride except for trying to cross a few major intersections (38th, which has no pedestrian treatments anywhere, and Lake, which has a light, but isn't tripped by cyclists). The Greenway is obviously a calm haven. Despite it being the longer route, we've started taking the Sabo bridge as our Hiawatha crossing as well. There's no good way between the creek and the bridge to cross Hiawatha by bike.”

With a network of protected bikeways, Nicole says, “We could actually visit those places by bike. Right now, we just don't go.”

A protected bikeway is any dedicated bike facility that is protected or kept apart from motorized traffic. There are three types:

- Protected bike lanes, or bike lanes on commercial streets
that are physically protected from motorized traffic by a curb,
a row of parked cars, or another barrier.

- Neighborhood greenways, which turn low-volume residential
streets into car-free, linear parks, as is currently being
discussed in North Minneapolis

“As a mom, who is carrying her most precious cargo in the world, I can tell you--the status quo doesn't cut it. Adding a little extra paint to the status quo doesn't cut it. Minneapolis is a good city to bike in, but we can’t sit on our laurels and settle for “good”. Building a network of safe and comfortable bikeways that connects our world class system of parks and trails with the destinations people need to get to within the city would help make our city great.“

Ways you can support Bikeways for Everyone

The City of Minneapolis and Hennepin County are both updating their bicycle plans to include a network of protected bikeways. Visit www.bikewaysforeveryone.org to learn how you can help get a protected bikeway in your neighborhood.

Pledge to support the campaign at www.bikewaysforeveryone.org, share your “Bikeways for Me Story” and/or volunteer with the campaign. Businesses and organizations can join in as a supporter of the Bikeways for Everyone campaign.

Bikeways for Everyone is a collaborative campaign supported by a diverse array of organizations and local businesses who work to improve neighborhoods, public health, economic prosperity, equity, community development, environment, and biking in Minneapolis.

For the latest list of campaign supporters, visit www.bikewaysforeveryone.org.