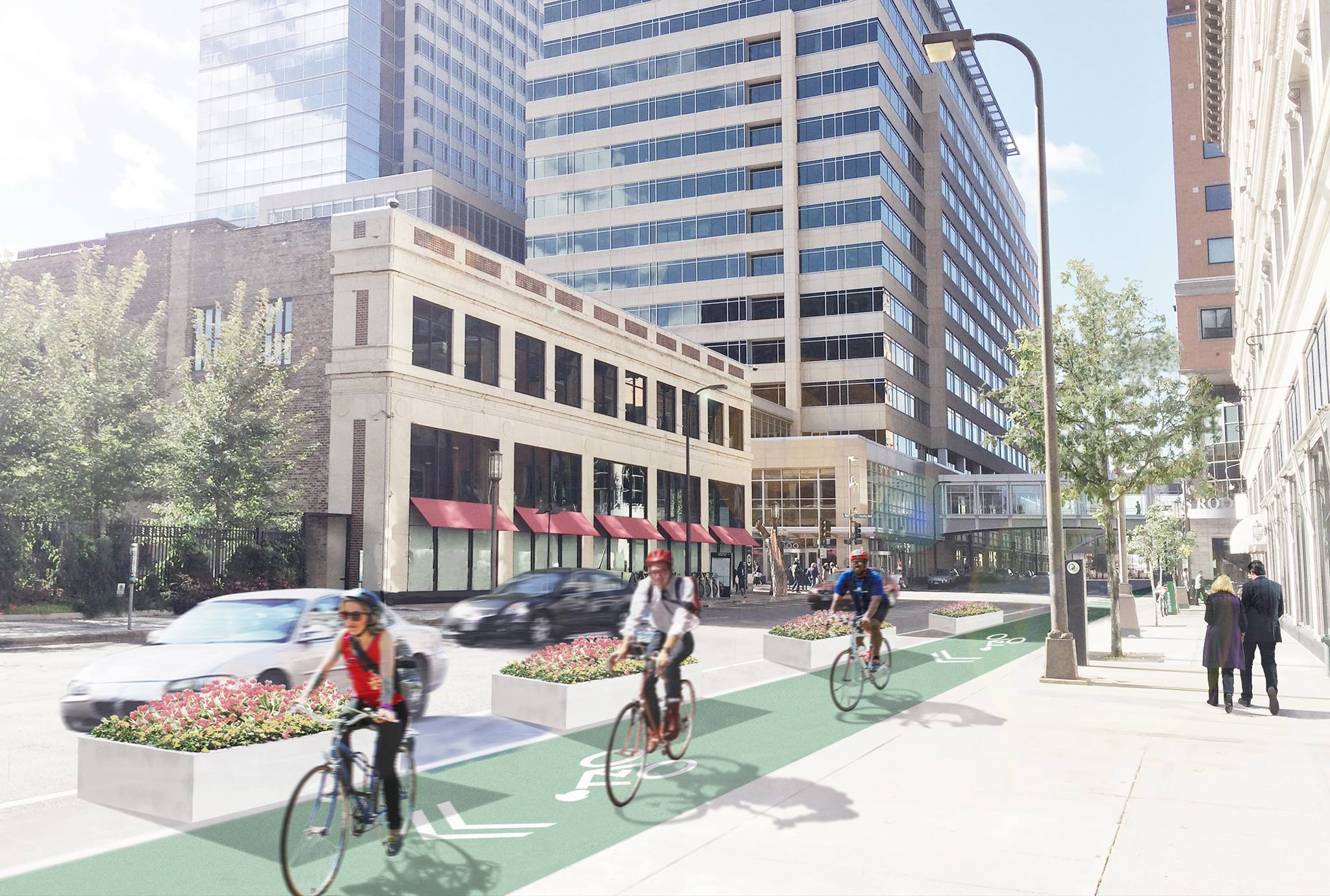 Bikeways for Everyone is pleased to announce that the Minneapolis City Council unanimously passed the Protected Bikeway Update to the Minneapolis Bicycle Master Plan, catapulting the City forward toward its goal of being bike friendly for anyone from kids going to school to seniors going to the park.

“This plan is a critical step forward for Minneapolis and we thank the City Council, Mayor Hodges, and staff for their work,” said Amy Brugh, Minneapolis Bicycle Coalition President. "A network of great protected bikeways will transform biking by making it safer and more comfortable for thousands of families like mine. We can't wait to see it built."

“The places where we live and work influence how healthy we can be,” said Janelle Waldock, director of the Center for Prevention at Blue Cross and Blue Shield of Minnesota. “That’s why Blue Cross supports Bikeways for Everyone, along with organizations throughout Minnesota working for long-term, permanent community change to increase physical activity. We are proud to play a part in making Minneapolis a healthier city.” 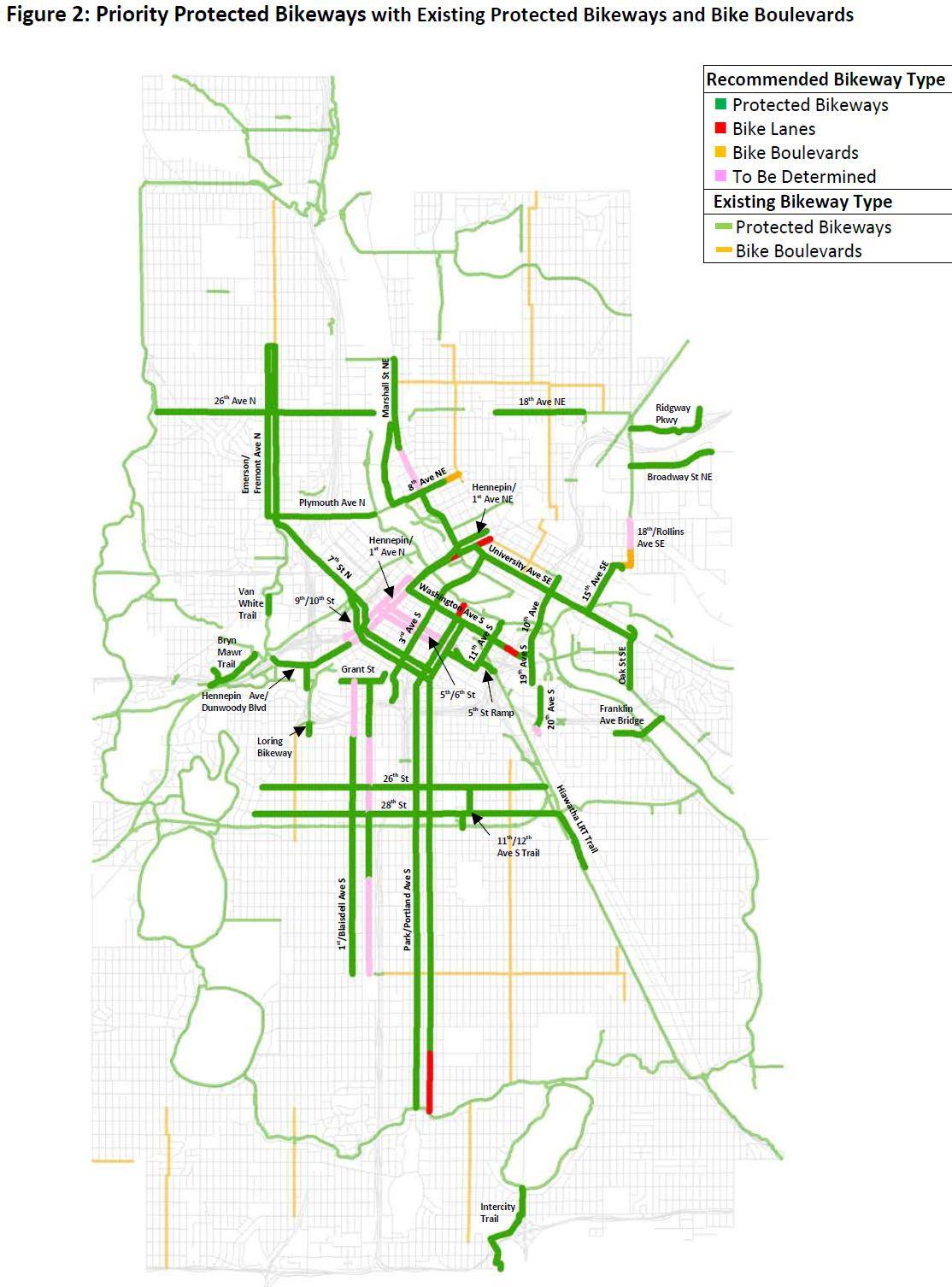 A network of protected bikeways--where people biking are separated from cars (and sidewalks) by some sort of physical barrier--will connect our world-class trail network with key destinations. This will knock down a major barrier that prevents many from biking, according to Midtown Greenway Executive Director Soren Jensen. “As we've seen from the popularity of the Midtown Greenway, we know what happens when protected bikeways are created -- people use them.  The protected bikeways plan is great news for biking in Minneapolis.” In fact, a 2012 study found that 65 percent of people say they would feel comfortable biking in a protected bikeway, while only 13 percent say they same about a street with no bikeway. New protected bike lanes on the Plymouth Avenue Bridge spurred an 81 percent increase in biking in the first year they opened.

Protected bikeways have more than tripled nationally from 2011 to 2014 as more than 50 cities have built new lanes. The proposed plan is among the most robust protected bikeway plans in the country and has draw national and international praise. “By approving the protected bikeway plan, Minneapolis positions itself as a national leader for making our streets safer and more accessible for everyone,” said Andrew Coldwell, Chair of the Sierra Club North Star Chapter’s Land Use and Transportation Committee. “Kudos to City Council and the thousands of community supporters who are working together to make these meaningful improvements possible.”

The protected bikeway plan initially focuses on the areas of the city with the biggest barriers to comfortable biking and the most destinations--largely connections into and through downtown for surrounding neighborhoods.

"It's critical that we improve connections between North Minneapolis and other parts of region," said Alexis Pennie of the North Minneapolis Bicycle Advocacy Council. "I'm excited that this plan will mark a new phase and starting point for better and more accessible bike routes into downtown from North that will support the rapidly growing community interest in biking."

“As proud partners in the Bikeways For Everyone campaign, we at car2go are thrilled that the City of Minneapolis has passed the Protected Bikeways Plan," said James Vierling of car2go. "We know from experience that Minneapolis residents benefit from affordable, convenient and sustainable options for getting where they need to go. It’s great to see the City support another way for residents to move throughout our community.”

The Bikeways for Everyone partners look forward to working with Minneapolis Public Works to ensure this plan is implemented as quickly and as well as possible so that everyone in Minneapolis will have access to quality bicycle infrastructure.

About Bikeways for Everyone

Bikeways for Everyone is a collaborative campaign of Minneapolis organizations and businesses working to see 30 new miles of protected bikeways built by 2020. More information at http://www.bikewaysforeveryone.org/