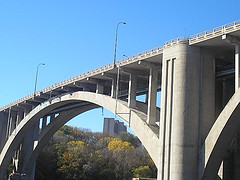 You may have noticed a lot of activity around the Franklin Avenue Bridge this summer. Well, what's going on is the bridge is being restored in order to allow it to last for many, many more years. So a good question to ask would be: what's going to be on that bridge for many, many years?

When the restoration is complete next year, there will be a sidewalk and one-way protected bikeway on each side of the bridge. The bikeways will be separated from the two lanes of car traffic with a 1 foot thick, three foot tall barrier. Aside from that positive change, Hennepin County is also adding a crossing from the north side of Franklin Avenue to the West River Parkway Trail. It's certainly better than the current crossing recommendation, which is, "make a left there, or maybe over there... don't worry, you've got this!" 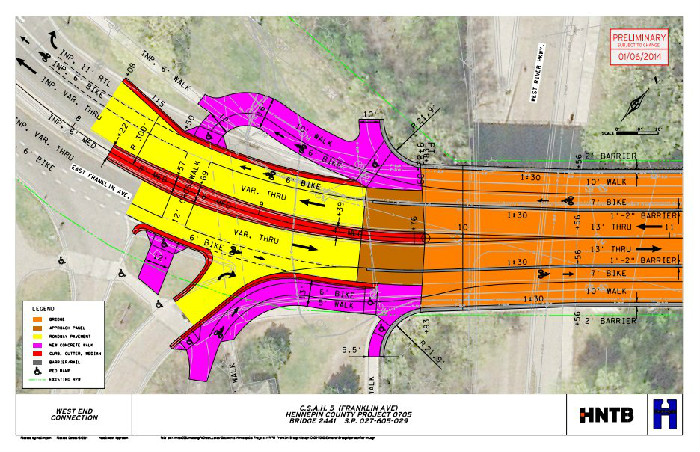 This bridge connects to the current bike lanes on the west side of the bridge. However, within the next few years, Franklin Avenue Southeast on the east side of the bridge, will have bike lanes added to it as well. When you remember that the bridge also connects with East River Parkway Trail and the 27th Avenue bike lanes on the East, you can see that this bridge is an incredibly important link in our network of bikeways. So, we're glad it's getting the makeover it deserves.

Before all is said and done, as we've come to expect in Minnesota, there will be many construction closures. Currently, the West River Parkway trail is already closed between the University of Minnesota's West Bank Campus and just south of the Franklin Avenue Bridge, which is forcing detours if you're going south on West River Parkway or if you're connecting from that trail to Franklin. The Lower East River Parkway Trail is currently closed between East River Flats and Cecil Street. As for the bridge itself, Hennepin County will be shutting down alternating halves of the bridge in order to prepare for the major construction that will take place in 2016. Two-way bike, pedestrian, and car traffic will be accommodated. In 2016, the bridge will close entirely for the major construction work. When all that is done, we will be left with a sturdier bridge and much better bicycle facilities.

If you have questions about the project or want a more detailed breakdown of the detours, you can visit the project website  and sign up for email updates or email Hennepin County directly. There will also be upcoming opportunities to become engaged in the project, which will be sent out by email. And feel free to come talk to us about the project more at Open Streets Franklin, coming up on August 16th!