County opts for buffered over protected bike lane for Minnehaha 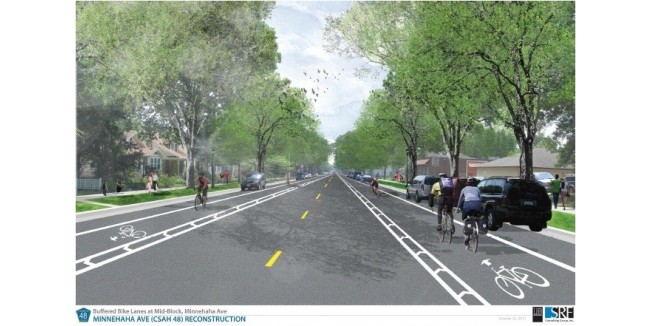 Background
Minnehaha Avenue is being reconstructed between Lake Street and Minnehaha Parkway South in 2015. It provided a once-in-50-year opportunity to make big improvements to the street.

Decision
After nearly two years of discussions, outreach, and education, the general layout for Minnehaha Avenue was approved in December 2013. It's not all of what we'd hoped for, but it will be a nice improvement and we have a lot of other positives to take away from the effort.

On Dec. 13, on an 11-1 vote, the Minneapolis City Council approved Hennepin County’s layout for Minnehaha Avenue south of Lake Street. The plan the County is advancing will be one of the best on-street bike lanes in the state and a significant step up from what is there today. But it is certaily a missed opportunity for a transformative improvement for the area.

Minneapolis, Minn.—Hennepin County has chosen not to approve a protected bike lane (“cycle track”) on Minnehaha Avenue and instead implement improvements to the on-street bike lanes. The decision comes after significant public support for a protected bike lane, which would greatly enhanced comfort for bicyclists and automobile drivers alike.

“I am disappointed that the county was unwilling to put forth a viable cycle-track design for Minnehaha Avenue,” said Nicole Nafziger, an area resident who has faced challenges bicycling on Minnehaha Avenue with her two children. “My impression of the initial cycle track design that the county put forward was that it was poorly designed and intended to fail. I would have liked to have seen better collaboration with cycle track experts to truly put forth a viable design to maximize safety and comfort for all people who want to use Minnehaha. However, even without a cycle track, the reconstruction of Minnehaha Avenue should be an improvement over its current state, and I look forward to experiencing the results of the project.”

The decision on Minnehaha Avenue came after the county presented two options at public meetings in July—one with a cycle track and one with an on-street bike lane. Of the 130 people who filled out comment cards at the July meetings, 89 offered a preference for a cycle track. Additionally, more than 900 people signed postcards in support of a cycle track on Minnehaha. The postcards were delivered to elected officials Hennepin County Commissioner Peter McLaughlin, and City Council Members Sandy Colvin Roy and Gary Schiff in August.

“We’re certainly disappointed this opportunity for Minnehaha was not seized by the county, especially when you consider the community support,” said Ethan Fawley of the Minneapolis Bicycle Coalition. “I hope the county can find ways to have more meaningful public input for future projects as we never got the sense that input on Minnehaha Avenue was truly considered.”

A protected bicycle lane—or cycle track—is a bicycle lane that is physically separated from both pedestrian traffic and car traffic. This physical separation can be achieved with curbs, planters, trees, plastic bollards or a combination of these or other buffers. Protected bicycle lanes are widely used throughout the United States, including in Chicago, Portland, Oregon, Washington D.C., and about 100 other cities. Numerous studies have shown that well-designed protected bike lanes are safer and attract more people to bicycle than on-street painted bicycle lanes. The best current example of protected bike lane in Minneapolis similar to what was being explored on Minnehaha is on 6th Street SE near the TCF Bank football stadium.

County officials have stated that they are planning to use national best practices for on-street bike lanes, including adding a two-foot painted buffer and adding green paint where appropriate at intersections. They will present more details of their plan at public meetings on September 30 and October 2 from 6:00 p.m. to 8:00 p.m. at Minnehaha Communion Lutheran Church at 4101 37th Avenue South. The county plans to seek municipal consent for its redesign plans from the Minneapolis City Council in November.

“We’re glad the county is committed to at least designing high quality on-street bike lanes for Minnehaha,” said Fawley. “We’ve asked them to design it to allow for the possibility of a relatively simple change to a protected bike lane in the future.”

Minnehaha Avenue will be reconstructed from Lake Street to Minnehaha Parkway in 2015 and 2016. The street was last reconstructed in the late 1950s. The reconstruction includes replacing curbs, which allows for the addition of a protected bike lane with little, if any, additional cost.

“Minnehaha Avenue is a major connector to the Midtown Greenway, but we’ve heard that many families are afraid to use the bike lane on the street because the only thing separating them from fast-moving traffic is paint,” said Soren Jensen of the Midtown Greenway Coalition who lives right off of Minnehaha. “Frankly, the current paint scheme doesn't make people feel safe. The bike lane improvements will certainly help, but a protected bike lane would have done more to help families bike safely to and from the Midtown Greenway.”

Sheldon Mains from SPOKES Bike Walk Connect offered his experience from working with adults learning to ride: “Our new riders have said 'paint won't stop a car from hitting me.' The buffer is a step in the right direction for providing a welcoming environment for more types of people interested in biking, but it is necessary that we make the leap to a protected bike lane in the future.”

One of the reasons offered by county staff for not supporting the cycle track is that they do not have a current policy on protected bike lanes. The county is in the midst of updating their bike plan, which was last updated 15 years ago.

“Cities all around the country are investing in protected bike lanes and Minnehaha Avenue would have been a great opportunity to join that trend,” said Joshua Houdek with the Sierra Club North Star Chapter. “We’ll be continuing to encourage the county to implement smart policies and plans around protected bike lanes, so that the next project will be an all-around success.”