A crowd packed the Pohlad Auditorium at Central Library on Wednesday night to see the latest ideas for redesigning Nicollet Mall into a corridor that will stretch from Loring Park to the Mississippi.

Protected bike lanes were shown in the winning competition drawings created by James Corner Field Operations, the firm that designed the High Line in Manhattan. Minneapolis’s Climate Action Plan, which was approved by the City Council last June calls for adding 30 miles of protected bikeways by 2020. The Minneapolis Bicycle Coalition is working to support this goal.

The Engineering Subcommittee of the BAC has endorsed protected bike lanes on Nicollet, but the drawings presented Wednesday night took a different approach. A shared surface that would allow for the mixing of transit and cyclists was presented. 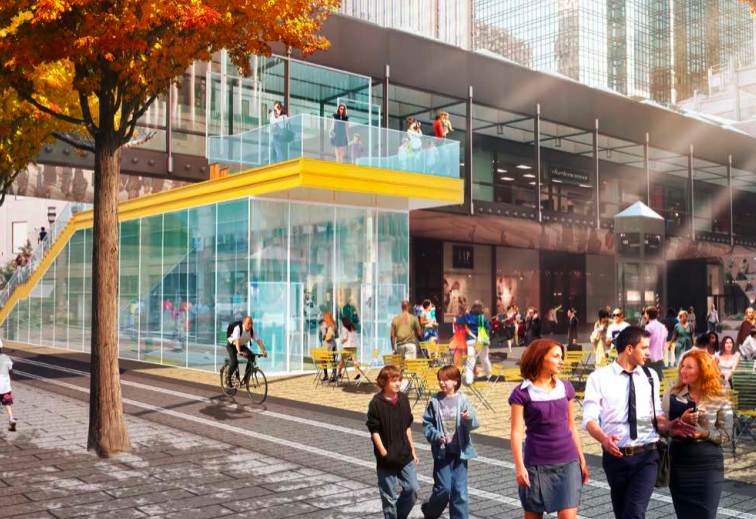 When asked about the shift away from protected bike lanes, James Corner responded that in the competition drawings the tracks took 8 feet, but in reality, 12-14 feet would be needed while transit – both buses and streetcars will eventually run here – would require 14 feet. The street is about 80 feet wide on average. Creating separated spaces for transit and cyclists would take space from pedestrians.

In support of a shared surface concept, Corner showed Exhibition Road in London, which allows pedestrians, cyclists and cars to mix on a flat surface without obvious separation. It is notable that Shared Space, as it is called in The Netherlands, has also been used successfully in Dutch town centers where it seems to actually improve traffic safety. Without signs and separation, people naturally become more cautious slowing down and exhibiting more courteous behavior whether they are behind the wheel or on a bike. The Nicollet design, however, is not proposing this kind of pure approach to shared space. A curb separates pedestrian from cyclists and transit, which means only these two modes would share space, as they do in the current situation. 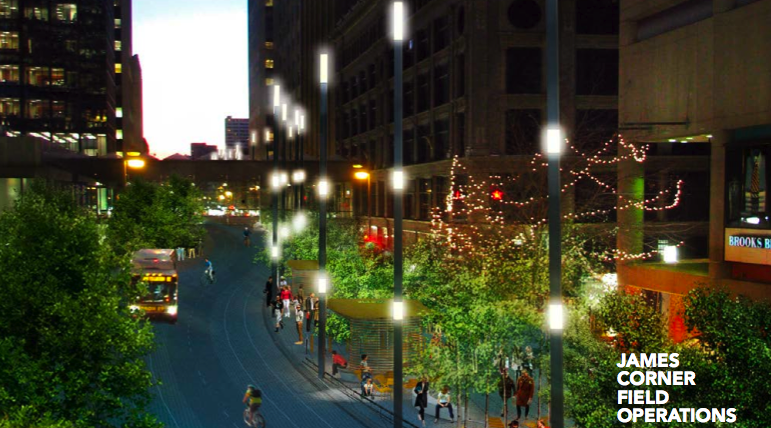 New improvements for cyclists discussed at the presentation included technology that would make year-round cycling easier. Corner mentioned a retractable substance that fills in rail tracks when they are not in use so cyclists have a flat surface and no worries about their wheels catching. Snow-melting pavement stretching from storefront to storefront was also discussed. Other potential cycling accommodations include, more bike parking, Nice Ride stands and bike service facilities.

Of course, the design process is only half over, and funding is still being worked out. Governor Dayton has requested $20 million through his bonding bill. The project is expected to total $50 million. It is proposed the additional funding will come from a special property tax assessment. At the presentation, Corner mentioned the High Line, which cost $1 million to build, has generated $2 billion in economic development.

Nicollet is one of the city’s most popular pedestrian streets and transit and cycling will make the street vibrant. There is still time to speak up in favor of cycling facilities. After all, cycling downtown reduces congestion and supports local businesses.

“We are aiming no lower than making Nicollet a world class street,” Mayor Hodges said Wednesday night. Minneapolis is a cycling city, let’s make sure Nicollet reflects this by participating in the process. Take the online survey here.