A report on the City of Minneapolis Protected Bikeway draft plan open house, by Ben Schweigert, with contributions by David Wee, and photos by Grant Boelter

A steady stream of people turned out to the Hennepin County Central Library for the City’s open house on its draft Protected Bikeway Plan on April 29th. The plan aims to create an additional 48 miles of protected bikeways throughout the city, helping more people will feel comfortable riding more, with all of the attendant health, environmental, and community benefits biking brings.

The public comment period ends 5/17/2015, so make sure you comment on the plan if you haven't already!

Excitement for the draft plan

The open house was informal with a lot of one-on-one or small group conversations. There were eleven posted information displays around the room with titles like "What is a Protected Bikeway," "Updating the Bicycle Master Plan," "Corridor Selection Criteria," and "Recommended Protected Bikeway Network."  The room never got crowded, and many of the people present seemed to be planners, municipal policy types, or others with a professional interest in the document, but a certain energy nonetheless pervaded the conversations. The protected bikeway plan represents a major rethinking of the way that people bicycle in Minneapolis: raising the profile of biking relative to other modes of transportation, and increasing its visibility to bikers and nonbikers alike. This change recognizes the increasing centrality of biking to the City’s sense of self, and the people present seemed to grasp that -- and be excited about it. 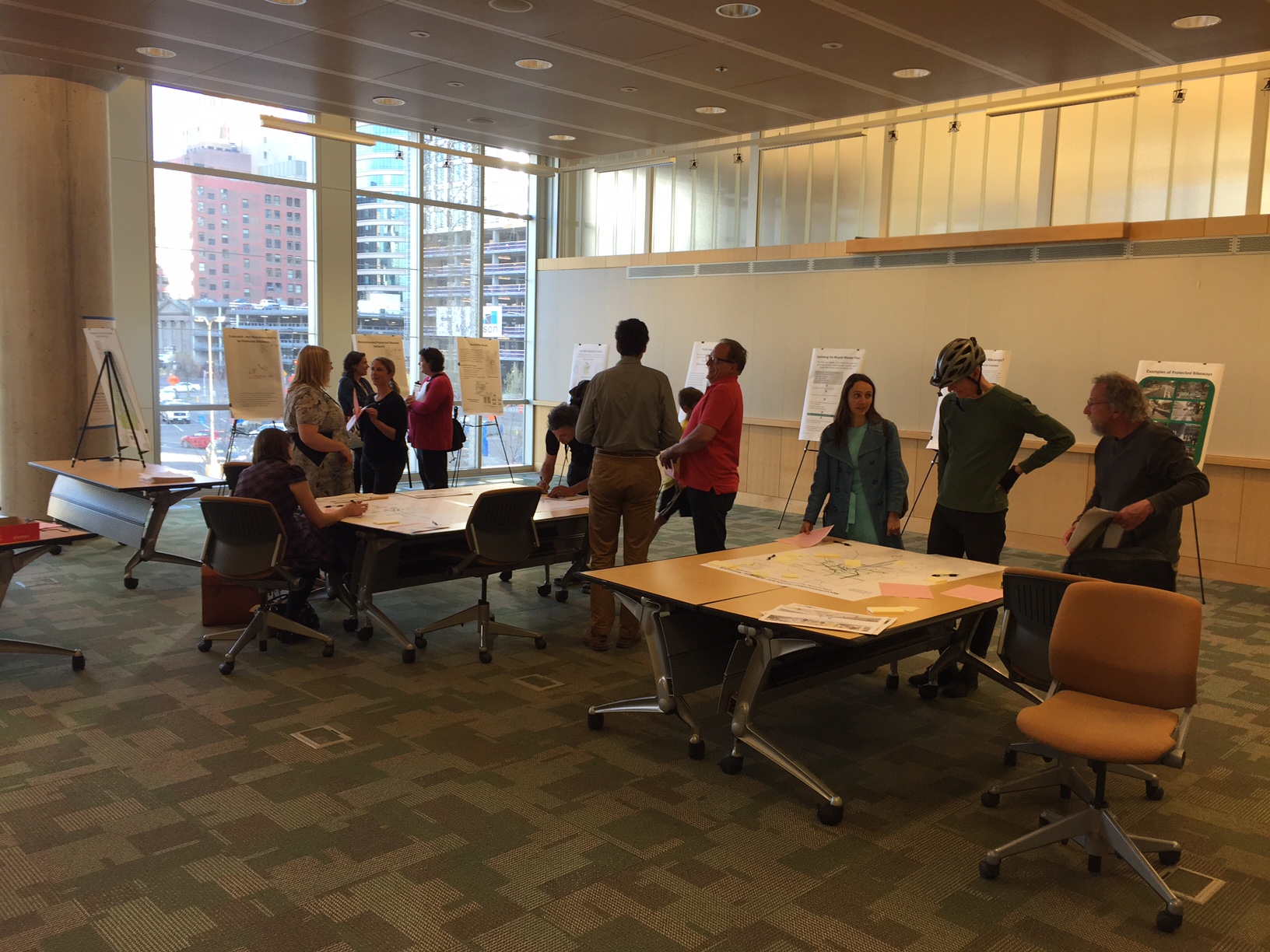 City staff were happy to talk to anyone about the plan and answer questions. Everyone seemed generally excited. But many people had constructive criticism on particular details of the plan, which city staff collected on feedback forms and on Post-It notes stuck to maps of the plan.

By far the most common critiques related to connections between the new protected bikeways and with the rest of the city’s bicycle infrastructure. Out of all the conversations about the connectivity of the protected bikeways in the downtown street grid, the most controversial point in that discussion was the plan to put a protected bikeway on 3rd Avenue, which would connect well to the Central Avenue Bridge but would leave an awkward connection to southbound bike infrastructure. Protected bikeways on Marquette and 2nd would connect well to south Minneapolis via the bikeways on Blaisdell and 1st Avenue, but would require riders to jog over a block or two to make the connection with the Central Avenue bridge. Attendees pointed out various other connectivity quirks throughout the plan.

The city staff present all appeared genuinely interested in these comments, and the many others raised through the evening. We urge any of you reading this please share your thoughts online before the comment period closes 5/17/2015. Everyone who rides regularly is an expert on the best and worst aspects of the bike infrastructure along their routes. This expertise is invaluable to the City, so please share it with them. And, of course, tell them that you support a major investment in protected bikeways throughout the city – bikeways that are safe and welcoming for everyone.

To learn more about the Minneapolis Bicycle Coalition's opinions on the draft plan, read this post.